With this first workshop we wanted to begin surfacing as many of the possible problems that the monograph strategy might need to address – the project tried not to constrain the discussions or problem statements too much; at this stage we want to get as many of the problems out in the open as possible, we can do the refining, editing and prioritising later. 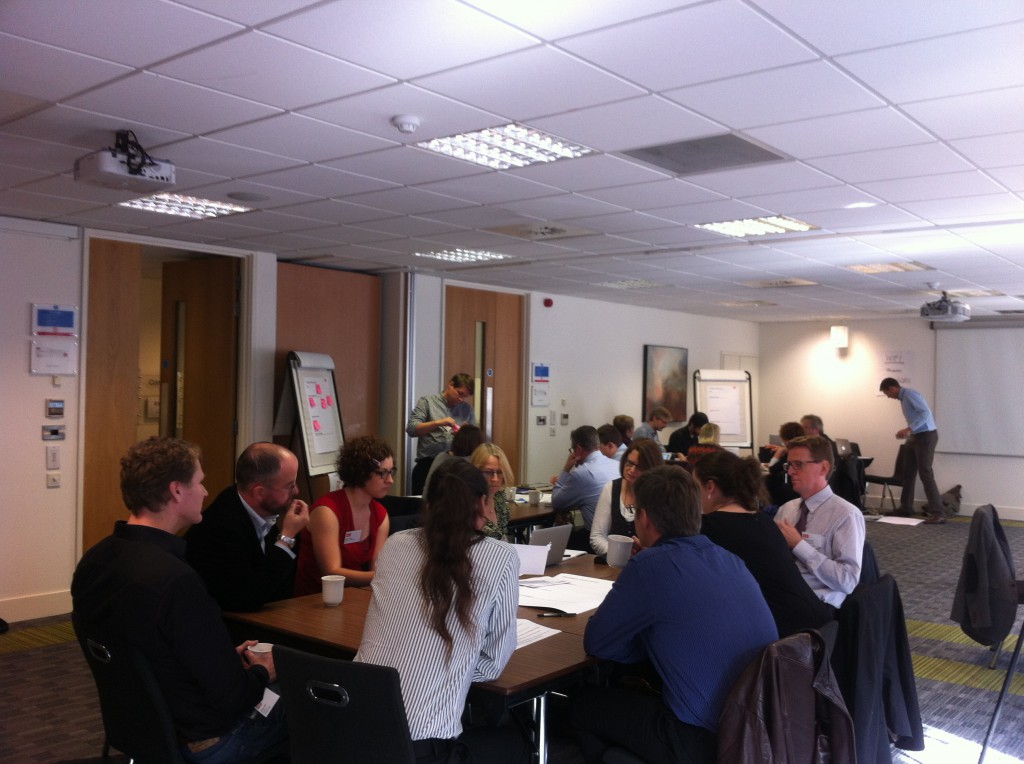 The workshop was very participant led, and used a version of the open-space technology approach for the meeting.

This provided the project with an opportunity to make sure the participants could lead on the discussions and we would be able to capture the kinds of problems that they wanted to discuss and note down.

These problems were then mapped against some headline themes: Create, Publish, Receive and Store, Access, and Use.

The day ended with participants voting on their top 3 problems (these are the green post-it notes), and noting why they were voting for that particular problem. 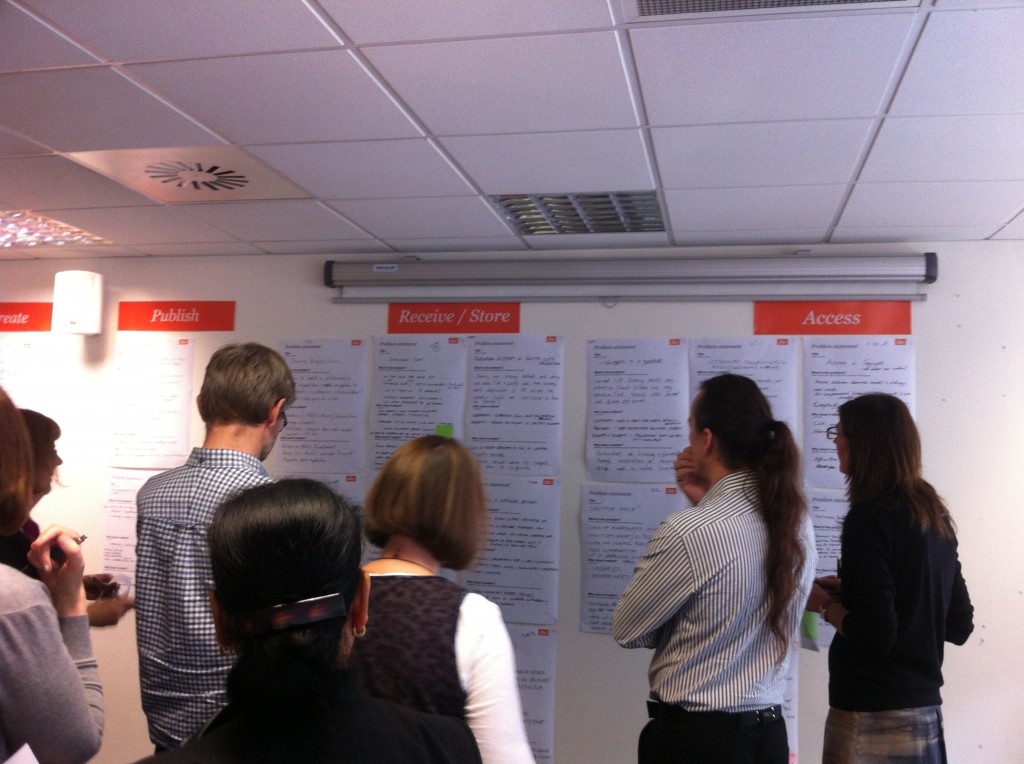 Below is a ‘booklet’ with all the problem statements that were produced on the day in their raw, unadulterated form.

You can see where the participants have placed their votes for the top problems a monographs strategy needs to address.

Now we’d like to know what yours are – there’s a full list at the National monographs Strategy project Ideascale site where you can vote on your top three.

It’s probably worth noting that two of the highest voted problems aren’t on that list, these were:

We have decided that these problems are so fundamental to the project that they have to be addressed in order to develop a successful strategy – We simply have to do them!

So… We’d love to hear from you on your top three problems, so feel free to take a look at Ideascale and vote on the ones you feel are critical: http://monographs.ideascale.com/

Or comment below and add one we haven’t got yet. 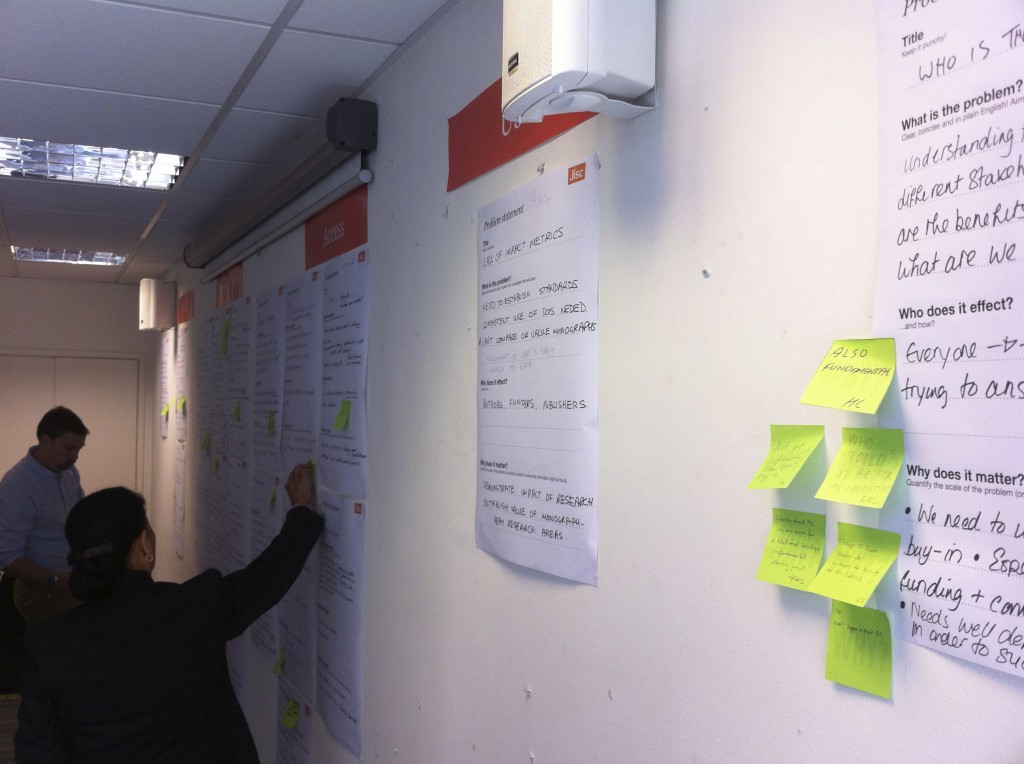 Finally – These problems are still in their raw and unrefined condition (but, I think you’ll agree there not bad for a one-day workshop, especially given the number of statements that were produced) so over the coming weeks the NMS team will be refining these statements so we have a set of clear problems with which we can kick-off our second workshop to begin exploring the solutions space.

We’ll be posting the refined versions of the problems very shortly.

3 thoughts on “What are Your Top 3 Monograph Problems?”

We use cookies on our website to give you the most relevant experience by remembering your preferences and repeat visits. By clicking “Accept All”, you consent to the use of ALL the cookies. However, you may visit "Cookie Settings" to provide a controlled consent.
Cookie SettingsAccept All
Manage consent

This website uses cookies to improve your experience while you navigate through the website. Out of these, the cookies that are categorized as necessary are stored on your browser as they are essential for the working of basic functionalities of the website. We also use third-party cookies that help us analyze and understand how you use this website. These cookies will be stored in your browser only with your consent. You also have the option to opt-out of these cookies. But opting out of some of these cookies may affect your browsing experience.
Necessary Always Enabled
Necessary cookies are absolutely essential for the website to function properly. This category only includes cookies that ensures basic functionalities and security features of the website. These cookies do not store any personal information.
Non-necessary
Any cookies that may not be particularly necessary for the website to function and is used specifically to collect user personal data via analytics, ads, other embedded contents are termed as non-necessary cookies. It is mandatory to procure user consent prior to running these cookies on your website.
SAVE & ACCEPT