We’ve had some very interesting conversations over the last couple of weeks with librarians about e-books, at Digifest and at the day-long workshop we held for project participants.  We feel your pain!

The e-book market is in its infancy compared to print, so it probably isn’t all that surprising that there is still turbulence and some attempted solutions likely to die out, just as in evolutionary biology.  The academic books market is also a little different than the trade book or general fiction market where most progress to date has occurred.  Academic books often contain tricky things like tables and figures, mathematical notation and references, that some e-formats just don’t display comfortably.

Unsure of the best fix, publishers and aggregators are trying out different business models, different formats and platforms, and imposing a host of different sets of licence terms and conditions to see which work for you and them.  But that causes headaches for those trying to present their patrons with a coherent collection.  Meanwhile, students and lecturers are getting frustrated because they need access to the content sooner not later.  How the library manages these things is of no interest to them.

We’ve collected over 1200 titles identified by librarians as problematic for them in some way, and started to work on the data.  Simply not being able to find out about e-book versions emerged as the biggest problem, and conversations since have confirmed this as a top priority. 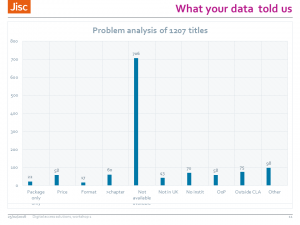 We’re working on finding out more about these titles, since the reasons behind not being able to find them as e-books vary.  When we have a bit more to go on, we’ll be able to start discussing possible solutions to some of the problems.

We’ve also found that although libraries have different preferred business models (credits, rentals, EBP, PDA) they’d much prefer it if they could buy outright at a reasonable price. In-library access only is almost universally considered useless, because students want to work at times and in places to suit them, not the library’s opening hours.  And with geographically-split campuses and distance-learning becoming more widespread, remote access is important for librarians and patrons alike.

For most libraries, access to monographs is to fulfil requests for reading lists.  That doesn’t mean research requests, space-saving, preservation or collection-building is unimportant, just that having material for students to access for their courses is the strategic priority.  I’m not sure publishers have woken up to the rise of student satisfaction scores when they think about this type of content, and how libraries need to be able to make it available more widely.  There must be some opportunities where a need exists.

We use cookies on our website to give you the most relevant experience by remembering your preferences and repeat visits. By clicking “Accept All”, you consent to the use of ALL the cookies. However, you may visit "Cookie Settings" to provide a controlled consent.
Cookie SettingsAccept All
Manage consent

This website uses cookies to improve your experience while you navigate through the website. Out of these, the cookies that are categorized as necessary are stored on your browser as they are essential for the working of basic functionalities of the website. We also use third-party cookies that help us analyze and understand how you use this website. These cookies will be stored in your browser only with your consent. You also have the option to opt-out of these cookies. But opting out of some of these cookies may affect your browsing experience.
Necessary Always Enabled
Necessary cookies are absolutely essential for the website to function properly. This category only includes cookies that ensures basic functionalities and security features of the website. These cookies do not store any personal information.
Non-necessary
Any cookies that may not be particularly necessary for the website to function and is used specifically to collect user personal data via analytics, ads, other embedded contents are termed as non-necessary cookies. It is mandatory to procure user consent prior to running these cookies on your website.
SAVE & ACCEPT